In the fall of 2022, Landworks Studio brought on a few new staff members. As part of their introduction to our work, we selected a few of our favorite recent projects to take them on visits to. At each of these project sites, we showed them around and talked about the history and interesting details behind each park. One site in particular had very specific meaning to it and a touching story from the community. In discussing the story of the park, it was shared that, unlike many of our projects, this park was financed by a private donation.

It then posed the question: How is a project that is funded by private donations different than those with more traditional funding?

The answer, it turns out, wasn’t as simple as it seemed.

1. Tell us a little about privately funded projects. Are these types of projects common?

Individual donations are not often common, but we have seen more interest in recent years. This type of funding mechanism can be more challenging for a variety of reasons and that may contribute to why they aren’t seen as frequently.

2. There are some obvious benefits to having a project backed by a private donation. Can you elaborate on some of the other benefits?

When donors step forward with contributions that align with a city’s master plan/goals/guiding principles/strategic planning, it allows a city the opportunity to accomplish established/defined goals earlier than anticipated or allows the inclusion of more amenities than the project originally intended. A donor may also bring with them a focus, inspiration or purpose that adds meaning to the park or design in some way and that can gain a tremendous amount of support from the community.

3. What are some things to consider when working on a project that is privately funded - are there any risks to it?

Donations can be considered in one of two ways. A single donor may come forward with an interest in a particular project or aspect of a project. Much more common is an organization who wants to get involved in a park project and has donors or intentions to fundraise. These are equally challenging but in different ways.

In either case, it is important to understand how much of a donation is intended to be made. If the anticipated dollars don’t come to fruition, but the project will still move forward, the city needs to have an alternate method of funding for execution and completion. This could be either in a phased approach to the project or the city may need to be willing and able to utilize more of its own funds for the project completion.

Determining how the city will accept the money needs to be understood before the process can begin.  Many park departments don’t have the ability to accept financial contributions unless the department has a foundation. Otherwise, the donation may need to be made to another city entity and made available for the park department’s use. It is also important to learn from the donor if their funding has stipulations. A donor may want to participate in a particular aspect of the project. It is best to have clear responsibilities for design, construction or specific amenities associated with the project.

A park department needs to know and understand insurance and liability coverage associated with the use of private donations as part of the procurement process. The funds really need to be deposited for the city’s use and be distributed through the city’s established processes as opposed to a private donor writing a check to the design firm or any contractors, for example.

Naming rights and desired signage or acknowledgement are important to understand from the donor. What are the city’s requirements for dedication and signage?

As for risks, when donors offer resources for a project that doesn’t fit into the community’s needs, the project can become an additional responsibility the city can’t afford or can’t maintain. A donor can also become overly invested in the details of a project that might be best left to city staff and officials.

Donors may have unusual or impractical demands that can become difficult for the city to comply with or accept.

Donors might believe they have more influence or decision-making power over the process or decisions than the city might be willing to accommodate. Will the donor control the design direction, dictate program elements, or have final approval? Or will the donor simply provide the financial resources and be informed once the plans have been approved? Understanding what the donors need and want from their contributions early in the process allows a project to run more smoothly.

Lastly, the donor may have certain professionals, contractors, or suppliers they want to utilize for the project. Understanding what this looks like for the city is important, especially when the project will be competitively bid.

4. Have you been a part of any privately funded projects in recent years that you would consider to be an exemplary success?

Landworks Studio has completed two park projects in recent years that involved private donations. One project involved a high-profile donation for a community park with a rigid completion schedule. The other project was a smaller neighborhood asset with a hands-on donor passionate about improving the community for its residents. Each of these projects was successful in a variety of ways. Certainly, the higher the profile, the larger the audience and the more complex the challenges become.

5. Can you tell us about any privately funded projects that you’ve been a part of during your career that have really stuck out for good or bad reasons? What would you say was the biggest lesson learned during that/those project(s)?

The biggest challenge I have faced with a privately funded project became the conflict between the donor needs and wants and listening to the public and/or other stakeholders. Ultimately, when a private donor brings money to the table the assumption is that voice carries the most weight. But as a public agency, it is the public that needs to be listened to and served so the project is successful for the residents of the community. The resolution to this must be transparency in the process and having everyone sharing a seat at the table early when the development of ideas is forming.

6. Do you have any tips for those preparing to engage in a project that will be funded through private donations?

Communication from the beginning and then throughout the process until completion is key for a successful project. Both the donor and City will have needs and desired outcomes that will have to be met for a project to be considered successful. Allowing the donor to participate in conceptualization of the park or various aspects can be a terrific way to develop the relationship with the donor. You don’t, however, want to allow so much communication and input that it becomes intrusive. You don’t want the donor talking with the construction crews and circumventing the construction administration process!

If a donor intends to be very hands on, it is worth noting that not all donors understand the parameters the city may need to follow, including procurement requirements, ADA and other safety related requirements and the difference between residential construction and construction for public use.  Cost estimating early might be necessary for the donor to understand how their donations might be best utilized. Sticker shock is quite common with donors if they are not in a construction related industry.

Lastly, a memorandum of understanding should be drawn up with all pertinent details of the arrangement documented by both parties. This can help avoid any misunderstandings or provide guidance in the event a situation arises.

The generosity of citizens in our communities is an opportunity for a win/win/win. Establishing the roadmap during the initial stages and documenting the roles and responsibilities of all parties will set the project up for success! 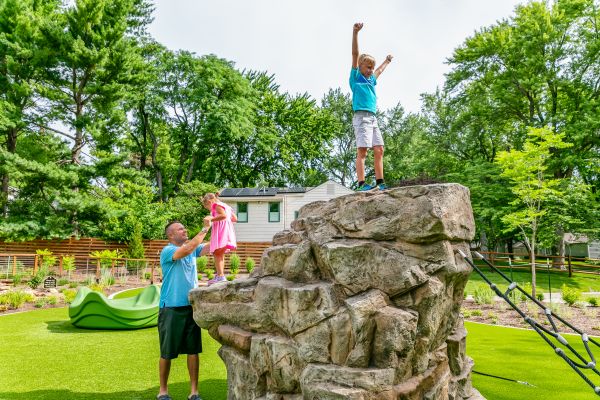