Water Resource Solutions (WRS) was working with the City of Prairie Village, KS to remedy a long-standing stormwater problem in one of their residential neighborhoods near Delmar Ln. and Fontana St, just south of 83rd St. It is a situation, which is not uncommon in the Kansas City suburbs. In the 1950’s and 60’s, homes were built quickly, and existing streams or creeks were simply channelized into small, narrow, concrete-lined flumes between lots. Today, when the area receives a heavy thunderstorm, those concrete flumes become raging torrents.

The City asked WRS to design a more robust, “green” channel, which would not only hold and convey the stormwater, but also allow it to infiltrate the soil. WRS hired us to specify plants to be installed within this channel and provide minor landscaping for the adjacent homeowners who would experience some construction activity along their side and rear lot lines.

We quickly learned this stormwater project was going to have significant impacts to the lawns and landscapes of 12 different homeowners. Ultimately, we not only developed a simple plant palette for the insides of the stormwater channel, but also created personalized landscape plans for those most heavily impacted by the improvements.

This has been a rewarding project for several reasons. We’ve enjoyed the superb coordination with our client (WRS), the City of Prairie Village and the citizens and homeowners in the area. The City’s stormwater engineer, Cliff Speegle, worked with us to set up meetings with each homeowner. Those meetings allowed us to hear directly from each person. We presented 28 different concepts to 12 homeowners and learned which aesthetics the residents wanted to see in their yards.

These concepts were designed with two goals in mind: restore and revitalize. The City wanted to replace any significant trees that would be removed as part of this project. In addition, they were committed to helping these homeowners revitalize their properties given that years of flooding had left the fringes adjacent to the old channels rather unkempt and wild. We chose plant material which complimented what these homeowners and their neighbors were already using elsewhere in their yards. Here is an example of one.

When it came to specifying plants for the green channel, we had a tough task. We needed to choose items that could tolerate periodic inundation by water, but also survive long stretches of dry weather. They needed to be:

Ultimately, we opted to go with a mix of plants, which included liriope, carpet bugle, blue rug juniper and daylilies.

Construction of the stormwater channel is currently underway, and landscape installation will take place both late this fall and early next spring. Ultimately, this project will eliminate a flooding issue that has plagued the neighborhood for decades. This project combines two areas of our practice that we love and do all the time: stormwater BMP design and public engagement. And, it has also allowed us to stretch into another market - residential design. 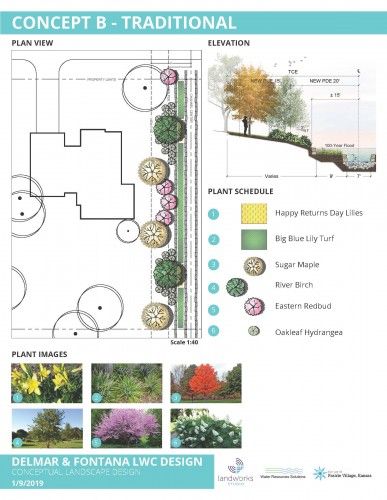 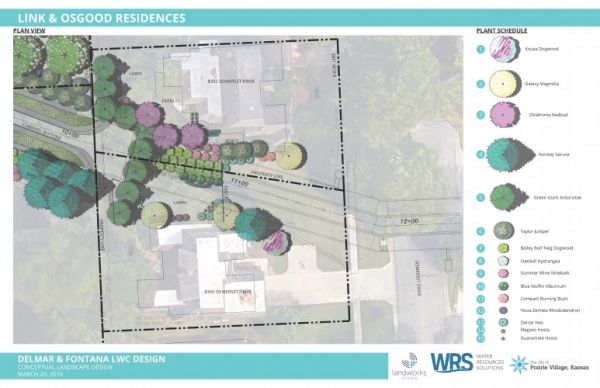